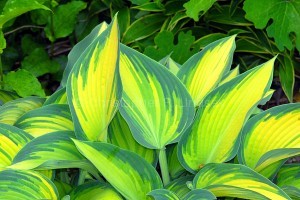 Hosta ‘Paradise Joyce’ in the garden. Who can deny the beauty of that foliage? Stuff like this made me order more.

When I first started gardening I didn’t care for Hosta much.  I wanted the flashy perennials that wowed you with colorful flowers, fruit, and foliage.  What I didn’t realize then is that those characteristics are often a flash in the pan; you’re later left with nothing but drab brown seed pods, wilting foliage, or worse — a carpet of solid green.

That doesn’t mean that Hosta are the ultimate answer.  But what they can do is provide a stable architectural foundation in your garden from spring to fall that you can utilize when designing the rest of your beds.  And they’re not ugly!  Some are fragrant, many are variegated in hues of white, cream, gold, steely blue, even picking up hints of orange and red now.  Their sizes vary, they’re tough and don’t need a ton of water or maintenance, and they all have different architectural qualities.  So when I was looking at all of the holes in my garden this summer I realized that I really needed more Hosta.

After looking around online I placed an order this fall from New Hampshire Hostas¹.  They had great prices and great stock, so I figured “Why not?”   Here’s what I ordered: 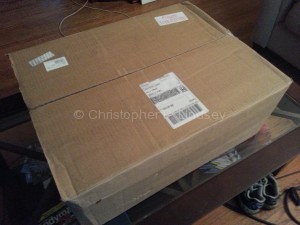 My big order of Hosta had arrived! 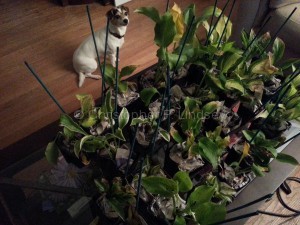 All of the Hosta laid out on the coffee table. Lula looks on approvingly.

The plants all arrived in great shape, and although some of the plants had lost their leaves because it was so late in the season I could tell that the crowns and roots were strong.

Of course, I’m faced with the same problem as last time. Where do I put them all? I have ideas, but time is running out as Old Man Winter approaches. I may plant them in a holding bed with a lot of mulch to prevent heaving, then get out there in the spring and move them to permanent homes.

It will be tough to wait. Some of these Hosta are really exciting to me — ‘Gentle Giant’ can reach 6′ wide and 4′ tall; how’s that for a bold statement in the garden?  Maybe I’ll have to order more in the spring…