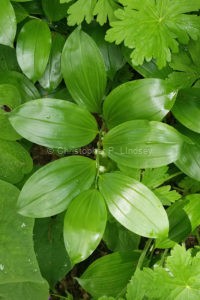 I really like the dark glossy leaves and relatively short height, and I really like seeing those bright white flowers almost glowing in the spring.

Originally it was probably a little too dark in the corner where I planted it, but the neighbor cut down a bunch of evergreens two years ago which provided a lot more late afternoon light. They’ve really taken off since then (although they’re also slightly threatened by an also-invigorated Geranium macrorrhizum).

It has spread to a sizable clump (about 5′ x 5′) and is a great backdrop for short plants with liighter or duskier leaves.