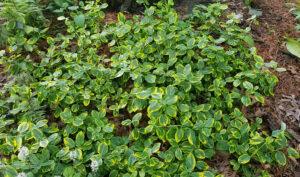 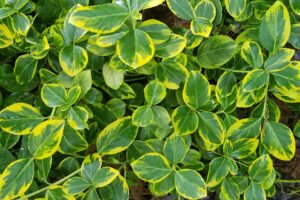 I first saw this vining Euonymus at the Morton Arboretum about twenty-five years ago. It was amazing to see how well it lit up a dark space under some yews, and I resolved to buy some for my own yard.

The problem was that I couldn’t find it anywhere. I was constantly looking online, checking garden centers, asking friends and relatives to do the same, but the searches weren’t turning anything up. Until… One day in 2000 I found one remaining pot at a K-Mart while buying a bunch of other stuff. It was quickly added to the bottom of the cart, paid for, loaded into my car, and driven to my parents’ house. I immediately started unloading the car so I could show off my reward, but it wasn’t there! Despite looking everywhere, we couldn’t find it and concluded I had left it in the cart. I drove back, but it wasn’t in the cart and nobody had brought one in. Someone got a very nice, free plant in the parking lot that day.

I was dejected, but kept looking. Finally, in 2002, I found some at a local Lowe’s in a two-gallon pot for the low, low price of $16.38. I bought one for myself and one for my Mom, made sure I put them in the car, and immediately planted it in a darkened corner of the yard once I got back to own my house.

I’ve been really happy with it. It sometimes has reversions that have to be pruned, but other than that it has remained pretty restrained and doesn’t spread outside of its 3×3′ allocated space. I’ve never seen it flower or fruit, so I feel pretty comfortable keeping it in my yard despite the species status as a noxic weed. I wish ban lists were a little more forgiving with some cultivars.

Anyhow… What you see is pretty much what you get. I only grow it for the brilliant yellow-gold and green foliage which pops so well in shady nooks. It also acts as a great foil for other plants; mine is planted next to blue and dark green hosta, and behind Tiarella ‘Spring Symphony’.