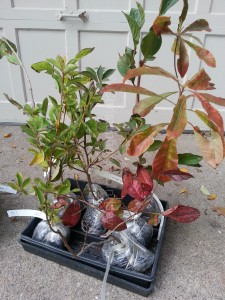 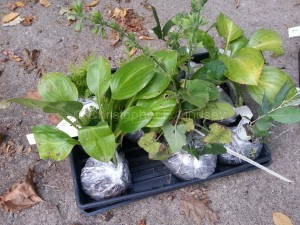 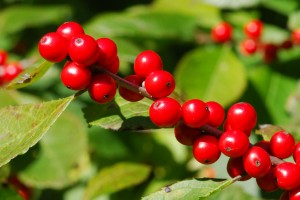 One of the many hollies in the Dawes collection

In late September I had to be in Columbus, Ohio for a meeting after 3pm.  We arrived late the night before, dogs in tow, planning to leave first thing in the morning to visit the Dawes Arboretum for a few hours before work.

I wasn’t really sure what to expect.  I had been to the Dawes before, but that was eight years ago.  I knew that I had taken a lot of pictures then, but I wasn’t sure of what.  I was sure I could find something new to photograph, though.

I did know that the Arboretum is huge — it covers over 1800 acres — although the formal collections are smaller.  They have an excellent holly collection (recognized by the Holly Society of America), a huge conifer garden, maples, crabapples, and a lot of other stuff.  I wasn’t sure how much we’d get to see in our brief visit.

One thing that I didn’t realize is how much smaller the operations are at the Dawes Arboretum than, say, the Morton Arboretum.  When we first arrived we were looking for a gatehouse or place to pay; our family membership at the Morton Arboretum is reciprocal, but they only give two membership cards and they were in my wife and son’s name.  We drove right past the visitor center because we were looking for a huge parking lot like we were used to, and it took us a little while to figure out that we had missed it (in hindsight, this is a good thing).

When we went into the visitor center we were shocked to discover that admission was free — lately it seems like everybody’s trying to stick their hand into my wallet.  Except, apparently, the Dawes Arboretum.  They’re funded by donors.  Although it’s just a drop in the bucket, I wanted to thank them by becoming a member.  And besides, my $30 membership was going to be reciprocal at other gardens, so now our Morton Arboretum membership woes were irrelevant.  We bought a cookie cutter in the gift shop, then toured the grounds with our two dogs.

Yes, dogs.  The Dawes allows leashed dogs!  The dogs were so excited and had to smell everything, and this pretty much ruined most photography attempts for the first hour.  Holding a 40-pound dog on a leash while trying to take a macro shot of holly berries is difficult at best.  I think he knew when I was about to release the shutter and would time his lunges just to mess me up.  After an hour of frustration my wife ended up keeping the dogs in the car while I walked around and took lots and lots of pictures.  She took one for the cause, and I was able to “do my thing.” 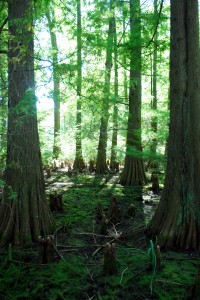 The cypress swamp at Dawes.

I can’t see the forest through the trees when I visit a garden for the first time.  I’m hyperfocused on the individual plant species and I run around excitedly from tree to shrub, snapping a photo of the label and then a few photos of the plant itself.  I don’t really have a sense of a garden’s overall design unless I make a conscious effort, and I didn’t really do that at the Dawes.

As a result, all I can tell you is that I got a great shot of Orixa japonica over by the Japanese gardens. The Liquidambar (sweetgums) were in fall color, the hollies were coming along (but many weren’t quite ready yet), the crabapples looked great, and I ran out of time photographing the conifer collection. 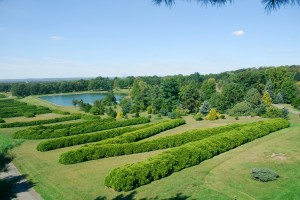 Conifers galore, some in letters!

We did climb to the top of the outpost tower at one point to get a better overall view, and we also saw the 2,400 foot-long hedge spelling out ‘Dawes Arboretum’ using arborvitae. My wife wanted to see salamanders, so we also peeked into the cypress swamp. Unfortunately it was a little too dry.

But for the most part my experience of the Arboretum was through a viewfinder with a camera stuck to my eye, lens trained on some rare find, hoping to preserve its character for others who weren’t able to see the plant in person. I may have taken 273 photos in two hours, but that was just a drop in the bucket compared to what I could have taken.  (However, I was thrilled to finally get a better shot of Ilex x attenuata  ‘Sunny Foster’ to replace my bad photos from the last visit).

So what’s the takeaway from this trip?  I had a great time.  I didn’t pay nearly as much attention to the Arboretum as I should have and I didn’t even have enough time to look at the plants the way I wanted to.  So we’re now planning a second five-hour drive out east (without the dogs), and hopefully we’ll get to take in a lot more of this Central Ohio gem.  The hollies should be brighter, the crabapples more visible, and the fall color will be a colorful mosaic of yellow, oranges, and reds by then.

But who am I kidding?  I’ll probably run out of time again and won’t see the forest through the trees. But that’s OK; I’ll just have to keep coming back until I do.