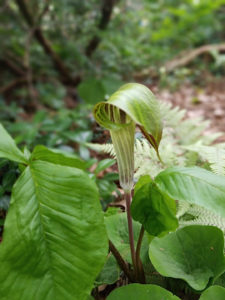 The ubiquitous jack-in-the-pulpit. You can find him evangelizing the benefits of native plants everywhere throughout my garden.

I don’t even know which one was the original. He’s been fairly promiscuous despite his preachy ways, and he has a lot of children throughout the garden. I’m actually not even sure if some of these are the straight species or hybrids with other aroid species.

They all pretty much looked the same until Arisaema sikokianum came and visited for twelve years. About four years ago it was suddenly gone, but all kinds of new jack-in-the-pulpits started coming up with really dark striped spathes. Now I have some that are almost solid black with green spadixes, some that are striped black and green, some that are pure green… I don’t know. They’re everywhere, but I like them.